For New Year 2017, I decided to do something different. Rather than sending out a holiday card, which to me is kind of typical, I wanted to do a New Year email, for all of the people who’ve impacted me in 2016. This meant, I reached out to co-workers, bosses, previous bosses, friends, parents, ex’s, you name it! I had about 40-people on my final list.

In the email, I shared a memory or encouraging words and a simple prayer at the end for what I hoped their New Year would bring. I didn’t do it for anything in return but I realized how short life is. In 2016, dozens of people passed away suddenly, when I least expected it, and I believe the worst feeling in life is when you lose someone who never knew how you truly felt about them or they have no idea that you remember the kindness they once showed you. So I feel like if 2016 has taught me anything (as horrible as it was), its that we have to love a little harder and encourage others. What I least expected to happen was people sending me notes of gratitude in return, sharing the same kindness that I’d shared with them, ultimately empowering me for a great new year too! 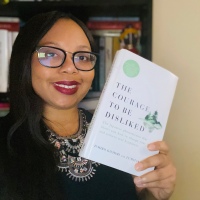